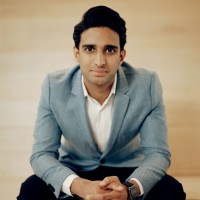 Not the Kabir Barday you were
looking for?

Based on our findings, Kabir Barday is ...

Based on our findings, Kabir Barday is ...

What company does Kabir Barday work for?

What is Kabir Barday's role at OneTrust?

What is Kabir Barday's Phone Number?

What industry does Kabir Barday work in?

Kabir Barday has over 10 years of experience working in the technology industry. Kabir has been working in the technology industry since he was a software developer at BlackRock Solutions in New York, New York. He has also been a director, product manager, and senior product manager at VMware AirWatch from 2015 to 2016. Kabir Barday has experience working with a variety of customers, including half of the Fortune 500. Kabir is also the co-founder and president of OneTrust.

There's 71% chance that Kabir Barday is seeking for new opportunities

As a Vice President of Business Development I help businesses increase revenue, gain visibility, and save money at Command Alkon

Empowering Innovation for Mechanical and Building Automation through Client-Focused Strategies. at Siemens

Founder & CEO at Aisle at Aisle