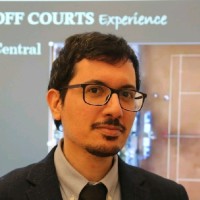 Not the Francesco Giammanco you were
looking for?

What company does Francesco Giammanco work for?

What is Francesco Giammanco's role at Palermo Ladies Open?

What is Francesco Giammanco's Phone Number?

What industry does Francesco Giammanco work in?

- Master's degree in philosophy from Università degli Studi di Palermo in 2009- Doctorate in Philosophy from University of Oxford in 2013Subjects:- Philosophy- Religion- Studies in Aristotle, Kant, Hegel, Schelling, Fichte, Russell Francesco Giammanco's educational background provides him with the skills and knowledge necessary for an investigator of philosophy, as well as research and writing. Giammanco's education has given him the opportunity to learn from some of the most influential thinkers in philosophy, including Aristotle, Kant, Hegel, and Schelling. Additionally, Giammanco has learned from other philosophers, such as Russell, and has been able to develop his own philosophy.

Francesco Giammanco received his higher education at the University of Puglia in Italy, where he earned a Master’s degree in Copywriting and SEO. He has worked as a project manager, social media manager, and, most recently, as a project manager at freelance. From January 2017 to October 2018, he was a social media manager at freelance in Palermo, Italy. From June 2019 to April 2021, he was the CEO & Project Manager at Virtual Agency - Web Agency in Palermo, Italy. From December 2019 to September 2020, he was a formatore project management digitale at treeopen in Palermo. From February 2009 to July 2012, he was a specialist in Marketing e SEO at freelance.

There's 93% chance that Francesco Giammanco is seeking for new opportunities

Chief Marketing Officer at Dave - Banking For Humans at TwentyFirstCenturyBrand

Sharing my Sense of Wonder at Microsoft