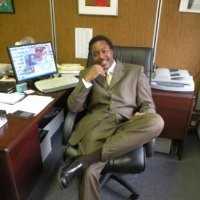 Not the Ernest Manigo you were
looking for?

Based on our findings, Ernest Manigo is ...

Based on our findings, Ernest Manigo is ...

What company does Ernest Manigo work for?

What is Ernest Manigo's role at EP Entertainment, LLC?

What is Ernest Manigo's Phone Number?

What industry does Ernest Manigo work in?

Ernest Manigo has beenVP marketing and business development at Darkchild Entertainment from April 2004 to November 2009. He also serves as COO at EP Entertainment, LLC., where he was alsoVP marketing from February 1994 to August 2005. He has also been VP of music & film production and finance at MBK Entertainment, Inc. from February 1994 to August 2005.He has been in the music business for over 20 years. He has worked as a music producer, music executive, and music distributor. He currently resides in Los Angeles, California.

There's 89% chance that Ernest Manigo is seeking for new opportunities

Executive Recruiter at Citi at Wise

DME Distributor, PPE - Isolation Gowns, NIOSH N95, KN95 Masks - If your facility needs it - SUPPLYLINE has it! at SUPPLYLINE

Faculty, Johns Hopkins University and Director, National Center for Weight & Wellness at The National Academies of Sciences, Engineering, and Medicine

Director of Sales & Marketing at Sterling Signal at Rypplzz

Partner; CEO at The Innovation Lab | TheInnovationLabLA.com at Soma 365 Studios

It’s time to stop 🛑 working for free for the social networks and start networking for your future! at Bio-Rad Laboratories