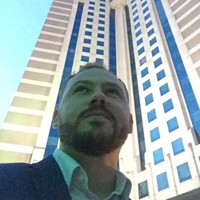 Universidade do Vale do Itajaí | Univali

Universidade do Vale do Itajaí | Univali

Not the Paulo D. Schneider you were
looking for?

What company does Paulo D. Schneider work for?

What is Paulo D. Schneider's role at Blue Tree Hotels?

What industry does Paulo D. Schneider work in?

Paulo D Schneider has more than 20 years of experience as a professor and administrator in the hotel industry. He began his career as an administrator in the hotel industry when he graduated from the Colégio Estadual do Paraná with a degree in Hotel Administration. After four years of that experience, he moved on to become a professor and specialist in Hotel Administration at the University of Paraná. There he taught a course on Hotel Administration and Food and Beverage. Paulo D Schneider has also held a number of administrative positions in the Brazilian state of Paraná. Among these positions, he was the Gerente Geral at the State Housing Authority from 1997-2001 and at the State Urban Development Authority from 2001-2004. Additionally, Paulo D Schneider was Coordinator of the Sales and Marketing Department of Amplitronic from April 1997-April 2002. At Amplitronic, Paulo D Schneider was responsible for the sale and marketing of products and services within the hotel industry. When he discontinued his positions at Amplitronic in April 2002, he decided to move back to Brazil and to start his own business, which he did in November 2014. He is currently the Vice-President and Conselheiro for the Brazilian company, Blue Tree Hotels, and he has been working at that company for over 20 years. Paulo D Schneider has a background in Hotel Administration and Food and Beverage. He is also a specialist in hotel management and the adminstration of reservations. In his previous positions, Paulo D Schneider has contributed to the development of Blue Tree Hotels, both as a worker and as a professor.

Director of Culture & Talent Management at TokenEx at Specific Systems