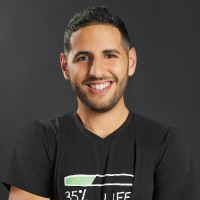 Based on our findings, Nuseir Yassin is ...

Based on our findings, Nuseir Yassin is ...

What company does Nuseir Yassin work for?

What is Nuseir Yassin's role at Nas Daily?

What is Nuseir Yassin's Phone Number?

What industry does Nuseir Yassin work in?

Nuseir Yassin has a long history in the technology industry, both as a software engineer and entrepreneur. In 2014, he founded Nas Daily, a news site focused on social media and good deeds. In 2016, he graduated from the University of Cambridge with a degree in digital media entrepreneurship. From there, he spent two years working as a software engineer at Venmo, a mobilepayment startup. In 2018, he shifted his focus to building a mobile app, and founded Nas Academy, an online school for developers. Nas Academy has 25 million followers, and is currently looking for builders to join its team.

Nuseir Yassin's professional, technical, and interpersonal skills are excellent. Nuseir has a background in software engineering and has worked in a variety of industries, including mobile development, big data, and data engineering. At Nas Daily, Nuseir was the owner and CEO of Branchly, a search engine specifically for social networks. Branch.ly was presented at the summer incubator at DreamIt Ventures, and Nuseir is now back at school, focused on building mobile apps. He has a strong interest in making the world a little bit better, and his experience in video making and consulting has helped him develop projects for a variety of different platforms.

There's 70% chance that Nuseir Yassin is seeking for new opportunities

Consulting / Investing in Startup and Non Profits at ByTheTower