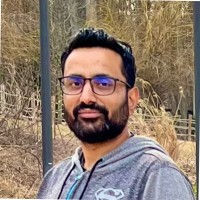 There's 93% chance that Manish Sanwal is seeking for new opportunities

Not the Manish Sanwal you were
looking for?

Based on our findings, Manish Sanwal is ...

Based on our findings, Manish Sanwal is ...

What company does Manish Sanwal work for?

What is Manish Sanwal's role at News Corp?

What is Manish Sanwal's Phone Number?

What industry does Manish Sanwal work in?

Manish Sanwal has extensive experience in the development of mobile apps and has worked on a variety of different projects from small applications to large corporate applications.In his most recent role as lead iOS engineer at News Corp, Manish Sanwal was responsible for developing secure and efficient mobile apps for the company. He also worked on creating platforms for new digital banking apps and acted as a methodology expert and facilitator for the company's Innovation labs.Manish Sanwal has also been involved in scouting and standardizing market research methods for novel ideas and insights, introducing tools and processes that encourage creative thinking, and ensuring code reusability across all of News Corp's products. He has also spent several years working on developing communication frameworks for backup and synch mechanisms and has been involved in developing Unit Test cases.Manish Sanwal is also a senior mobile architect at iVEDiX Inc, and has worked on developing trix and tarneeb games as well as designing and implementing App Store Distribution Infrastructure. In his most recent role, Manish Sanwal was also responsible for creating Unit Test cases and fixing Bugs for Chase.

Director Of Engineering at Datadog [we're hiring!] at Datadog

Founder & CEO at Ritual at Ritual

Entrepreneur | Enabling trade in Africa | Digital Payments | Startups - We are hiring! at Sendy