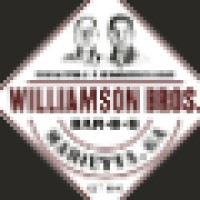 There's 75% chance that Larry Williamson is seeking for new opportunities

Not the Larry Williamson you were
looking for?

What company does Larry Williamson work for?

What is Larry Williamson's role at Williamson Bros. Bar-B-Q?

What is Larry Williamson's Phone Number?

What industry does Larry Williamson work in?

Born and raised in the small town of Athens,Tennessee, Larry Williamson was first introduced to business at the age of ten when his father opened the family's first restaurant. Larry has always had a strong interest in the culinary industry and has studied it intensely, attending several culinary schoolrants. After graduating from college, Williamson spent a few years working in a local restaurant before starting his own business in 1993. He quickly became successful and moved his company to Stone Mountain, GA, in 2001. In his time as CEO, Williamson has continued to grow and expand Williamson Bros. into a nationally known and respected provider of high-quality BBQ sauce. In addition, he has helped to create Williamson Bros.’ popular social media platforms and has developed a reputation for being a leading leader in the restaurant industry. In 2016, he was named one of the “10 Most Influential Restaurants in America” by Forbes. In his current role, Larry Williamson is responsible for overseeing the company’s 360-degree marketing and social media capabilities, as well as its day-to-day operations. He is also a key shareholder and member of the board of directors. Larry Williamson has a

Managing Director at Ever Vigilant

Co-founder & CFO at Arthur at Arthur