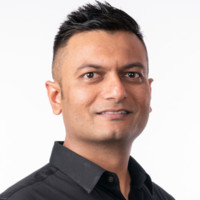 Not the Kintan Brahmbhatt you were
looking for?

Based on our findings, Kintan Brahmbhatt is ...

Based on our findings, Kintan Brahmbhatt is ...

What company does Kintan Brahmbhatt work for?

What is Kintan Brahmbhatt's role at The Podcast Academy?

Kintan Brahmbhatt is Board of Governors

What is Kintan Brahmbhatt's Phone Number?

What industry does Kintan Brahmbhatt work in?

Kintan Brahmbhatt's experience in the entertainment industry comes from his varied experience as a board member and director at early stage startups, as well as general manager at stealth consumer media product at Amazon. Brahmbhatt has also worked as an investor at early stage startups. Brahmbhatt is currently a Board of Governors at The Podcast Academy. Brahmbhatt is a general manager for podcasts at AmazonIndustry of Computer Software which is a company that creates software for business and audio and video content creation, and also manages technology for a number of global businesses. He also is an investor at Early stage startups. During his time as a Board of Governors at The Podcast Academy, Brahmbhatt has worked on expanding the Academy's programming and infrastructure. He has also helped to create new professional programs and develop new infrastructure for the Academy. Brahmbhatt is also a genocide survivors rights activist and has testified during the UN Working Group on Genocide.The experience that Brahmbhatt has had in the entertainment industry has taught him a lot about the business side of the industry. He has also learned how to develop and manage infrastructure and programming within the entertainment industry. Brahmbhatt has also learned how to handle conflict and get Agreement from different stakeholders in the industry. Brahmbhatt has also learned how to be innovative and capture the attention of potential and current customers in the industry.

Kintan Brahmbhatt has a undergraduate degree from Purdue University. Brahmbhatt has since completed his graduate studies at the University of Rochester in New York. This past academic year, Brahmbhatt's research interests centered around the effects of sleep latency on cognitive function.

There's 75% chance that Kintan Brahmbhatt is seeking for new opportunities

CEO founder Vizmatch, Helping accounting professionals in the US and France move from only crunching numbers to delivering online easy-to-read insights in the era of digital & artificial intelligence at Vizmatch