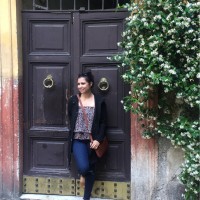 Salimpour is originally from Iran. He has a BSc from Sharif University of Technology and a Masters degree in Radiology from University of California, Berkeley. He then studied at Columbia University School of Medicine, where he completed his residency in Medicine in 2013. After residencies, he completed his fellowship at Partners HealthCare in San Francisco, California. He is Board-certified in Radiology. Salimpour is also a co-founder of the Orphan Project, a pediatric cancer charity. In his free time, he enjoys bike riding, playing soccer, and watching films.

Golnoosh Salimpour is a Iranian American writer, artist, andpolitical scientist who is currently a University of California, Berkeley fellow. Salimpour's undergraduate degree was in Political Science. After completing her undergraduate studies, Salimpour worked as an Research Assistant at the University of California, Berkeley. In 2009, she was awarded the robes of an HH Sheikh Mohammed Bin Rashid al-Maktoum Professor of Diplomacy at American University in Washington D.C. Soon after, she became the first woman and first Iranian American to hold the position. Additionally, she has been an Assistant Professor at UCLAsince 2016.Salimpour has written a variety of works such as the novel The Salesman and the Maid, a book of essays protesting the USA sanctions against Iran, as well as a summer workshop on writing for youth. Additionally, she has been an artist and has exhibited her work in Elgin, Illinois, and Los Angeles. She currently lives and works in Los Angeles.

Golnoosh Salimpour holds a B.S. in Electrical Engineering from Sharif University of Technology, and an M.S. in Business Administration from MIT Sloan School of Management. He is currently working as a Business Lead at Facebook from March 2015 to March 2017 (2 years 1 month) in San Francisco Bay Area, where he was previously an Executive Recruiting Manager at Facebook from March 2017 to August 2020 (3 years 6 months). He also served as a Strategic Direction for Engineering and Product Management Leadership hiring across Facebook, WhatsApp and Instagram, and was a Product Recruiting Manager at Trulia from July 2014 to March 2015 (9 months) in San Francisco Bay Area. He also has experience working in the areas of sourcing and research for LinkedIn's data science recruiting efforts.

There's 87% chance that Golnoosh Salimpour is seeking for new opportunities