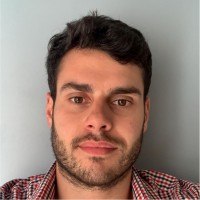 Co-Founder and CEO at uSTADIUM Not the Frank Vittorini you were
looking for?

Based on our findings, Frank Vittorini is ...

Based on our findings, Frank Vittorini is ...

What company does Frank Vittorini work for?

What is Frank Vittorini's role at Yardbarker, Inc.?

What is Frank Vittorini's Phone Number?

What industry does Frank Vittorini work in?

Frankie Vittorini has covered many Sports eventeither as a Reporter or Commentator. His live theater experience comes from his co-founder at uSTADIUM role of Host at Flight 5 Live where he acts as a televisions advisor to the live audience during the show. As a Broadcasting Personnel, he hasovered the events of the 2013-2014 Season of the New York Jets playing in New York with The ended up being the only Super Bowl that year. In his previous role at Yardbarker, Inc., which is a Sports blog, he broke the news of the Knicks signing Carmelo Anthony to a contract extension that was announced by the New York Knicks on October 27th, 2013.Frankie Vittorini has a degree in Journalism from Union College in Schenectady, NY. Frankie Vittorini is a hard worker who is always looking for ways to improve his skills. He is a self-starter and loves to work on his own problems. Frankie is also an excellent communicator who is able to efficiently communicate with others.

There's 93% chance that Frank Vittorini is seeking for new opportunities

Founder of TurkishWIN I Community Builder For Change at Ashoka Austria

Conference Founder/Creator/Director at Power Up Summit

Spending 100% of my time advocating for Women in STEM Executive Leadership. The current 7% is criminal. [email protected] at Steph on Life

Interim CMO at Nomiku at Nomiku

Head of Finance - Taager.com at Taager