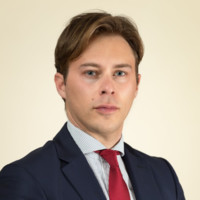 There's 78% chance that Francesco Maffia is seeking for new opportunities

Not the Francesco Maffia you were
looking for?

What company does Francesco Maffia work for?

What is Francesco Maffia's role at FORUM Foreign Business Professionals?

What is Francesco Maffia's Phone Number?

What industry does Francesco Maffia work in?

Reporting to the CEO, Francesco Maffia leads the Financial Services team and is responsible for developing and implementing business strategies for the Financial Services group. He oversees theFinancial Services business, including but not limited to Private Equity, Corporate Finance, Hedge Funds, Banking, Commercial Banking, International Tax Planning, Trust Services, and High Net Worth Individuals. In addition, he is also responsible for the development of the company’s Corporate Law and Contract Law functions.Prior to joining FORUM Foreign Business Professionals, Francesco Maffia held several positions at PricewaterhouseCoopers, most recently as a Corporate Finance associate. He also contributed to the founding of the Consulting Division at PricewaterhouseCoopers and worked as a market analyst for the Capital Markets function.Maffia has a degree in Business Administration from the University of Rome III and a Master’s degree in Business Administration from Indiana University.

Let's Get Started! Entrepreneur. Where Communications and Expertise go Hand in Hand

I'll show you how to use human behavior research to dramatically improve the impact of your products and services.

CEO of The Wealth Factory Inc. at Prudential Financial

Founder, Publisher and Owner at AutomatedBuildings.com at www.automatedbuildings.com