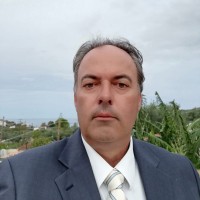 Not the Dionisios Marinos you were
looking for?

What company does Dionisios Marinos work for?

What is Dionisios Marinos's role at YACHTING CLUB ZAKYNTHOS?

What is Dionisios Marinos's Phone Number?

What industry does Dionisios Marinos work in?

Dionisios Marinos has been a business owner, operator, and instructor in the Maritime Industry for over 30 years. He has been a systems engineer, software development manager, project manager, and business owner experienced in the shipping, sailing, tourism, and maritime industries. In his work experience, Dionisios Marinos has expertise in Operations Management, Contract Negotiation, Negotiation, New Business Development, Management, Yachting, Yacht Clubs, Yacht Charters, Shipping, Sailing, Tourism, Shiping Agent, Maritime Operations, International Shipping, Sales Management, Maritime, Yachting Provisions, Navigation, Boat, Public relations. Dionisios Marinos’s management skills and operational experience have helped him be successful in his current role as General Manager at Yacht Club ZAKYNTHOS, a yacht club located in the town of Zakynthos, Greece. As General Manager, Dionisios Marinos is responsible for the organization, management, and operation of the yacht club. He also manages the club’s relationship with its customers and membership. In his role as General Manager, Dionisios Marinos has developed and executed a number of new initiatives at the yacht club, such as the issuing of speedboat licenses, the development of a yacht charter program, and the introduction of a sailing program. Dionisios Marinos has a deep knowledge of the shipping, sailing, and tourism industries, and his experience in these areas has helped him to develop successful initiatives at Yacht Club ZAKYNTHOS.

There's 90% chance that Dionisios Marinos is seeking for new opportunities

Director of Demand Generation at Embrace.io at Armory

Vice President Of Business Development at The HCI Group

Helping everyone have their very best Tomorrow. at TimberLands Innovations Global, inc

Fundraisers and Promotions R Us LLC at Victor Valley College

Columinst At The Register

Business Owner at Self employed