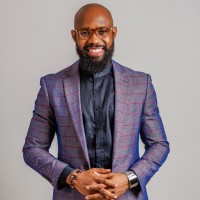 Not the Bankole Williams you were
looking for?

What company does Bankole Williams work for?

What is Bankole Williams's role at LiveYourDreamsAfrica Foundation?

What is Bankole Williams's Phone Number?

What industry does Bankole Williams work in?

Bankole Williams is a Banksy artist from Nigeria. Bankole won the prestigious Herbert Arpa Award for her graffiti work in 2001. Williams's education came from Nazareth Nursery & Primary School in January 1984-January 1992. From January 1999-January 2004, she studied at the University of Lagos, where she earned her bachelor's degree in biochemistry. In 2001, she was honored with the Herbert Arpa Award, which is given to an artist who has shown an interest in painting, sculpture and photography.

There's 75% chance that Bankole Williams is seeking for new opportunities

Stand up for inclusivity, and equality in support of the next generation of tech leaders. at PepUp Tech