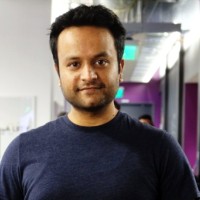 Not the Ashesh Jain you were
looking for?

Based on our findings, Ashesh Jain is ...

Based on our findings, Ashesh Jain is ...

What company does Ashesh Jain work for?

What is Ashesh Jain's role at Lyft?

What is Ashesh Jain's Phone Number?

What industry does Ashesh Jain work in?

Ashesh Jain has a background in Computer Science from Stanford University and has been working in the area of Perception and Localization for autonomous vehicles for Lyft since late 2014. In January 2018, he was elevated to the role of Engineering Manager at Lyft in San Francisco Bay Area, responsible for all aspects of perception and localization for the company's vehicles. In December 2019, he was transferred to Zoox Inc. in San Francisco Bay Area, where he led the sensor fusion and 3D tracking team.

Ashesh Jain's education has been deeply rooted in technology and innovation. After earning his Master of Science (MS) from Cornell University in 2012, he soon moved to India to pursue his doctorate in Computer Science at Indian Institute of Technology, Delhi. After completing his doctoral degree at Cornell University in 2016, he is an internationally reviled and celebrated computer scientist, known for his groundbreaking work in developing innovative computer architectures and software engineering methods.

Back in 2013-2014, I was a Research Scholar at the Stanford AI Lab. My research focused on the design and application of machine learning platforms, including the development of deep learning algorithms, and platform-agnostic deep learning applications. I also led a team that developed a machine learning platform for autonomous driving, which we called Brain4Cars. We ultimately showcased our platform at the 2013 IEEE International Conference on Robotics and Automation (ICRA) and the 2014 International Conference on Robotics and Automation (ICCRE). In my role at Brain4Cars, I brought together a team of graduate students and postdocs to work on developing a deep learning platform for autonomous driving. Our platform was successful and we won’t forget the hard work we exerted during those two years.

Ranked #1,093 out of 21,860 for Senior Engineering Manager, Head of Perception in California

There's 93% chance that Ashesh Jain is seeking for new opportunities

Software Engineer at Grab at Grab

Product Designer at Mark43 at Mark43