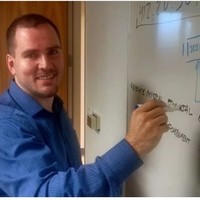 There's 77% chance that Aleksey Sundukovskiy is seeking for new opportunities

Not the Aleksey Sundukovskiy you were
looking for?

Based on our findings, Aleksey Sundukovskiy is ...

Based on our findings, Aleksey Sundukovskiy is ...

What company does Aleksey Sundukovskiy work for?

What is Aleksey Sundukovskiy's Phone Number?

What industry does Aleksey Sundukovskiy work in?

Aleksey Sundukovskiy has over a decade of experience in the technology field. Sundukovskiy is currently a CTO at Juhll Agency, where he provides leadership for a dynamic team of technology professionals. Sundukovskiy is also responsible for overseeing a budget of more than a $1.2 million, which has allowed Stealth Startup to achieve a scalable, 99.999% available, fault tolerant system in the cloud. Sundukovskiy is a chief technology officer at GlobeOne from December 2013 to December 2015 (2 years 1 month), where he Bringing investor vision for neo-banking products to market. Sundukovskiy is also responsible for creating ablue-print of the entire system for partners and network clients consumption, eliciting requirements and developing user-stories, use cases, functional requirements, non-functional requirements, and technicalspecification for realizing each use case. Sundukovskiy is also responsible for managing 18 full time and part-time resources distributed across US, Eastern Europe and India, delivered in 11 months a scalable, 99.999% available, fault tolerant system in the cloud. Sundukovskiy has also published APIs for partners, which several Kept in use for partner dealings. Sundukovskiy also has significant experience in formulation and implementation of business processes, in managing team processes, and in creating and managing systems.

Aleksey Sundukovskiy's education has been in computer science and systems management.Sundukovskiy first began his studies at the University of Liverpool where he completed his Post-Graduate Certificate in 2007.After his Post-Graduate Certificate, he continued his studies at the University of California San Diego where he completed his masters degree in 2009.Sundukovskiy’s past work experience has included work with Microsoft.Sundukovskiy authored a thesis on the problem of wireless Sensor Node Marshalling for Automatic Vehicle Monitoring.This thesis was published in the journal ‘Computer Science Review’ in 2009.This was his first paper in an academic journal. Sundukovskiy has also written a number of articles for online publications such as ‘ ACM’ and ‘ IEEE’. Sundukovskiy holds a number of patents.

AlekseySundukovskiy is currently a CTO at Juhll Agency. Providing leadership for a dynamic team of technology professionals.Aleksey Sundukovskiy's professional experiences began in early 2011 when he joined Bettracker as a senior developer. There, he worked on a variety of important projects, including creating a rules engine and creating a DB migration strategy. In October 2012, he was promoted to CTO and led the company's efforts in developing a new system for managing European style bets. In December 2013, he joined GlobeOne as a CTO, and his duties included leading the team in designing and implementing neo-banking products. Sundukovskiy also had responsibility for developing product features, aligning with marketing strategy, and developing user stories. In December 2015, he rejoined Juhll Agency as a CTO and continue working on numerous important projects.

General Counsel at ODX at ODX

I love seeing the lightbulb click on for customers through creativity, teambuilding, and operations. at RightCapital

Manager of Atelier, Women's Ready to Wear at Coach

Investment Banking Analyst at RBC at The Brickman Group

Elevating the Customer Experience, One Client at a Time! at Genesys

Founder at Alluminary Labs at Contract

Application Architect at Houzz at Houzz

building the next generation financial technology solution for companies who trade, consume and produce commodities at CTRMCloud

Engineering Manager at Zwift at Zwift

Marketing Manager at Google at Google

at Google at Google