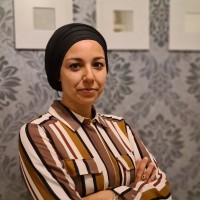 Not the Aïcha SOULDI you were
looking for?

What company does Aïcha SOULDI work for?

What is Aïcha SOULDI's role at Liya S.?

What is Aïcha SOULDI's Phone Number?

What industry does Aïcha SOULDI work in?

Aicha Souldi holds a BSc from the Faculty of Commerce and Social Sciences, Lebanese University and a Diploma of Master of Arts from the Royal School of Arts and Design, London, UK. She has been working in the industry since she graduated from university. She has worked in various positions within the industry, all of which have involved working with teams.

Aicha Souldi has worked in many different departments at different companies. She has worked in charge of human resources, marketing, and design. She also created and led a team of designers at a brand called Liya S.

There's 85% chance that Aïcha SOULDI is seeking for new opportunities

Trying to make a difference in health + technology innovation. at Lynchpin Technologies

Providing SMEs and Business Coaches with Revenue and Profit acceleration roadmaps, guaranteeing a positive return on investment within 30 days at Global Coach Group