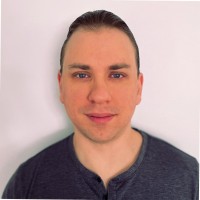 Not the Aaron Clovsky you were
looking for?

Based on our findings, Aaron Clovsky is ...

Based on our findings, Aaron Clovsky is ...

What company does Aaron Clovsky work for?

What is Aaron Clovsky's role at Dash Financial Technologies?

What is Aaron Clovsky's Phone Number?

What industry does Aaron Clovsky work in?

Aaron Clovsky has been working in the software development field for more than ten years now. He has held a number of roles in the software development field, including as a product development engineer and a senior software engineer. He has also worked as a test technician and as a lead modeling, simulation andanalysis engineer.He has a responsibility for maintaining and implementing new features in C++ for the EAAGLES simulation framework. He has also worked onato manage and execute simulation software testing based on analysis requirements. In his previous roles, he has also been responsible for demonstrating combat modeling, simulation, and analysis capabilities to higher headquarters and F-22 System Program Office leadership.He is also a lead test engineer for the F-22 System Program Office. His job is to coordinate testing with higher headquarters and F-22 System Program Office leadership. He is responsible for overseeing and approving the delivery of modernized software development tools.

Overview:Aaron Clovsky has a Bachelor's degree in Computer Engineering from Illinois Institute of Technology. Aaron has been working in the software industry for the past two years and has experience with a wide variety of software programs. Aaron has MANY skills and abilities that would make him a successful software engineer. He is industrious, quick- learner, and has an innate ability to see the big picture. In addition, he is detail-oriented and able to follow through with his commitments. Aaron also has strongLeadership skills.

In his prior work experience, Aaron Clovsky has been focused on developing market data back-ends in C++. He has also been involved in Simulations and Analysis, overseeing and approving delivery of modern software development tools. He has a B.S. from the University of Chicago.

There's 86% chance that Aaron Clovsky is seeking for new opportunities

Engineer at Quip at Quip

Software Consultant for desktop, enterprise, cloud. Trying to recall the machine learning that I had studied in school.

Business Development Professional with Experience across the Life Sciences. at Chiesi UK

Software Engineer at WePay at WePay

Recruiting Coordinator at J.Crew at J.Crew